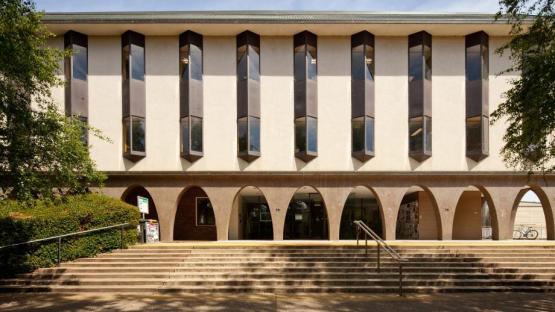 Yesterday, a month’s worth of rain fell in Canberra in just one hour. We watched as the gutters overflowed and the water crept up to our side door. Streets were closed all around us in O’Connor and drains flooded. Little did we know that the nearby university campus was also flooded – and then the news got worse. Water had surged into the basement of Chifley library putting part of its social sciences and humanities collection under half a metre of muddy water. I was in the basement of Chifley library on Friday gathering books on Delphi. I lay in bed last night, listening to another 10mm on rain falling and thinking about all of those important works on classics, ancient history, philosophy and biblical literature, now inundated. My face must have showed what I was thinking because my husband looked at me and said, “are you okay?”

The responses from various colleagues have been illuminating. Everything from deep sadness, shock and horror to criticisms of library and university policies and in some cases, indifference. Not everyone is a Chifley basement regular but for those who do use the collection and know the value of the books that have been kept down there for so many years, this is an absolute catastrophe. At the same time, as historians and classicists, such catastrophes should not necessarily come as a surprise. Furthermore, we must remember that in many cases, the books can be replaced. It is heartening that the University has said that it is “committed to restoring the collection”.

Whether made of papyrus, parchment or paper, books have always been vulnerable to damage. The many works of Aristotle and Theophrastus were kept as part of a private collection at the philosophical school (the Lyceum) which suffered damage during the anti-Macedonian riots in Athens in the fourth century. After Theophrastus died, the books  were bequeathed to one of Theophrastus’ pupils, Neleus of Scepsis. Plutarch tells us that the collection then passed into the hands of ‘unaspiring’ and ‘ordinary’ men. The books were stored underground where they suffered neglect and damage – others were sold, taken to Rome and copied.

The Library of Alexandria in Egypt, one of the most important libraries of the ancient world, was founded by Ptolemy I in the third century BCE. Demetrius of Phaleron, an Athenian politician and former student of Theophrastus’, had an important role to play in acquiring books for the collection. The library is said to have contained half a million book-rolls until it was destroyed, probably in the first century BCE, in a great fire that engulfed the city. The Alexandrian collection may have included 200,000 volumes from another famous library, the Library at Pergamum.

Chifley library is not the only humanities library in the modern world. Hopefully, many of the books on the upper shelves of the stacks have survived. Maybe some of those on the lower shelves can be recovered. I, for one, would be happy to roll up my sleeves and lend a hand to the clean up. We owe it to the great writers and thinkers of antiquity. Maybe next time, we can think about making this storehouse of ancient wisdom and knowledge a higher priority, both literally and metaphorically?