Criticising, nit-picking, fault finding, disapproving, censuring, blaming and attacking: all synonyms for an utterly human pastime and one that, if we are honest, most of us engage in at some level every day. Many centuries ago, the ancient Greeks were well acquainted with this tendency in human psychology transforming the concept into a personified abstraction named Momus, the Fault Finder. So who was Momus and what motivated him? When is fault finding warranted and unwarranted? And what is the remedy?

According to ancient Greek mythology, Momus was a son of Nyx (Night). The name ‘Momus’ comes from the Greek noun μῶμος meaning ‘blame’ or ‘censure’. He was born alongside other unappealing second-generation offspring of Night including Moros (Doom), Thanatos (Death), Geras (Old Age) and Eris (Strife). Given Momus’ mythic genealogy, there is little doubt that he was viewed as a distinctly negative and undesirable trait in personified form.

Momus is notorious in mythology for criticising the gods of Olympus (never a good idea). Here is the famous fable that illustrates this point:

Zeus had created a bull, Prometheus a man, and Athena a house, and they selected Momus as a judge of their handiwork. Momus was jealous of their creations and began by saying that Zeus had made a mistake in not putting a bull’s eyes on the ends of his horns so that he could see where he was striking, and he said that Prometheus was wrong in not hanging man’s heart on the outside so that scoundrels could be detected and so that it would be evident what everyone had on his mind. Finally, he said that Athena should have put wheels on her house so that a man could easily move if he had a bad neighbour. Zeus lost his temper with Momus over this spitefulness and threw him out of Olympus. (2)

This short and amusing fable speaks volumes about fault finding and its motivations. Zeus, Prometheus and Athena were all master craftsmen; they knew that their creations were astonishing and they duly expected Momus to be at a loss for words, hence choosing him as judge. But Momus, true to his nature, finds something to pick on. The problem is less with the criticisms per se (even though they are niggardly). Rather, it is the motivation behind each criticism that is wrong: to seek to bring others down out of jealousy or spitefulness.

In ancient Greek mythology, there was only one entity that Momus could not find fault with: Aphrodite (the goddess of love). Since he could not find fault with her personally, he criticised her sandal instead (for squeaking as she walked!). (3) So Momus’ great nemesis seems to be Love herself. As for us in our everyday lives, can we truly love another and blame or censure him/her at the same time? The two actions seem to me to be diametrically opposed.

There is another remedy for all of this constant fault-finding, and it can be found in the following fable:

Prometheus, after he had fashioned men, hung two bags from their necks, one filled with other men’s faults and one with their own. The one which contained the faults of others he put in front and hung the second one behind. The result has been that ever since men have been able to discern other men’s faults immediately but can’t foresee their own. (4) 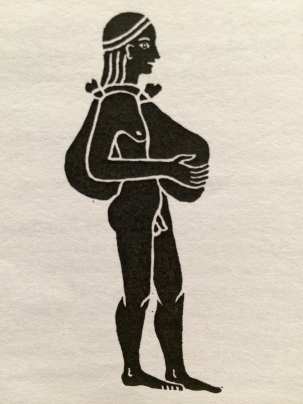 If we could see our own bag of faults, it would be so much harder for us to criticise others. And how often do we criticise others and then fall into a hole ourselves? Mind you, the two bags of faults in the illustration above are the same size and evenly balanced (i.e. our faults are equal in number to those we see in others). Now that’s a thought.

One thought on “The troll of ancient Greece: Momus”