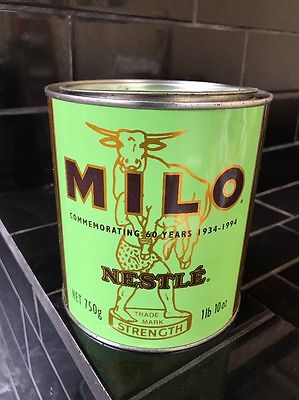 There is a proverbial scene in the movie My Big Fat Greek Wedding when Toula’s father plays one of his favourite word games while driving. He says, and I quote: “Give me a word, any word, and I show you how the root of that word is Greek”. I admit to enjoying this game myself (although with just a little less nationalistic fervour).

Sitting in our study on a cold Canberra night enjoying a cup of Milo, it suddenly occurred to me … “Milo”. Surely it couldn’t be Greek? Or perhaps it is!

Milo, for the sake of international readers, is a malt powder drink (made of milk powder, malt barley, sugar and cocoa) invented in Australia under the brand Nestlé. It is widely consumed by children and some discerning adults. Children either eat Milo mixed in the ratio of 9:1 (9 parts Milo, 1 part milk) or blow bubbles in it with a straw (occasionally drinking small quantities). Adults drink it as a warming drink on cold nights, sometimes with a splash of rum depending on how much work they need to do that evening. Milo is packaged in large 1.5 kg and 1.9kg tins (nobody buys the smaller ones) and it has a distinctive green label and logo. In 1934, the Australian food scientist Thomas Mayne (1901-1995) developed Milo to help improve children’s nutrition during The Great Depression (because apart from sugar and cocoa it has a few vitamins and minerals).

Now for the Greek bit…

As it turns out, the brand name ‘Milo’ is a reference to the ancient wrestler, Milo of Croton (Croton was a Greek colony in Southern Italy)!! Milo lived in the 6th century BC and was famous for winning no less than six Olympic victories. He is credited with incredible feats of strength, including training by carrying a bull on his shoulders (a printed image of this scene appeared on the first Milo tin labels in the 1930’s, see image above). He led an army in a war against Sybaris in 510 B.C. and was victorious. He seems to have been a rather Herculean figure, dressing in animal skins and eating whole animals to satisfy his enormous appetite.

What a fantastically appropriate name for an energy drink! And it is of Greek derivation!! Thomas Mayne was certainly paying attention to his Classics lessons at Trinity Grammar School in Melbourne.

Now, back to My Big Fat Greek Milo, which is just as delicious cold.

NB. A couple of interesting links:

Above is a clear photo of a vintage Milo tin depicting Milo of Croton carrying the bull on his shoulders.

And below is a link to the funniest and worst cinema advertisement I could ever imagine for Milo. It was screened in 1948 and is called “A Milo family album”. I think the killer line is “I’m still interested in rabbits, but strictly for research”:

Yes, I have posted this blog twice. First in early May and again today. Mostly because I have more readers now and I want everyone to know that MILO IS GREEK!!