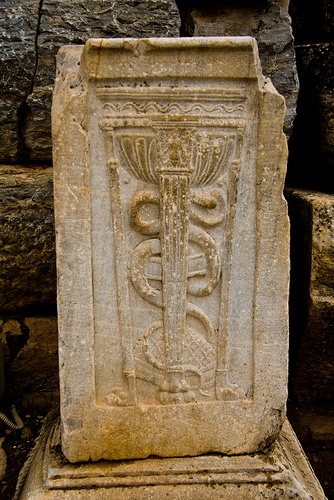 July in Canberra has seen a run of freezing cold nights (with temperatures dropping to minus 8 degrees) and mornings so thick with fog that I can’t even see the end of my street. In an effort to avoid incurring steep university parking fees I ride to work but, on one particularly cold (and wet) morning last week, the nasty wind chill got to me and before long I felt that awful ‘razor blade’ feeling in my throat. No amount of vitamin C tablets would be enough to avert it.

This week, I can hear the coughs of colleagues (and students) rattling up and down the corridors along with my own. I admit, it’s not ideal teaching (or studying) amidst a cloud of tissues, lozenges, antibiotics and hot drinks. But whenever I am feeling particularly sorry for myself for being brought down by the latest mutant germ, it cheers me up immensely to read Thucydides’ account of the plague of Athens. So here we go:

As a rule, however, there was no ostensible cause; but people in good health were all of a sudden attacked by violent heats in the head, and redness and inflammation in the eyes, the inward parts, such as the throat or tongue, becoming bloody and emitting an unnatural and fetid breath. [3] These symptoms were followed by sneezing and hoarseness, after which the pain soon reached the chest, and produced a hard cough. When it fixed in the stomach, it upset it; and discharges of bile of every kind named by physicians ensued, accompanied by very great distress. [4] In most cases also an ineffectual retching followed, producing violent spasms, which in some cases ceased soon after, in others much later. [5] Externally the body was not very hot to the touch, nor pale in its appearance, but reddish, livid, and breaking out into small pustules and ulcers. But internally it burned so that the patient could not bear to have on him clothing or linen even of the very lightest description; or indeed to be otherwise than stark naked. What they would have liked best would have been to throw themselves into cold water; as indeed was done by some of the neglected sick, who plunged into the rain-tanks in their agonies of unquenchable thirst; though it made no difference whether they drank little or much. [6] Besides this, the miserable feeling of not being able to rest or sleep never ceased to torment them. The body meanwhile did not waste away so long as the distemper was at its height, but held out to a marvel against its ravages; so that when they succumbed, as in most cases, on the seventh or eighth day to the internal inflammation, they had still some strength in them. But if they passed this stage, and the disease descended further into the bowels, inducing a violent ulceration there accompanied by severe diarrhea, this brought on a weakness which was generally fatal. [7] For the disorder first settled in the head, ran its course from thence through the whole of the body, and even where it did not prove mortal, it still left its mark on the extremities; [8] for it settled in the privy parts, the fingers and the toes, and many escaped with the loss of these, some too with that of their eyes. Others again were seized with an entire loss of memory on their first recovery, and did not know either themselves or their friends.(1)

I’m feeling better already. I only have 2% of the symptoms just described, so it mustn’t be the plague this time. I cannot imagine anything worse than suffering through the overcrowding in ancient Athens only to contract this hideous disease. Death must have been a welcome prospect just to avoid the excruciating symptoms. Remarkably though, Thucydides survived the plague (he was one of the lucky few). Right, time to cheer up, have another cup of tea folks, and Περαστικά everyone!

(‘Perastika’, Greek expression meaning ‘may it pass quickly’, or ‘get well soon’).