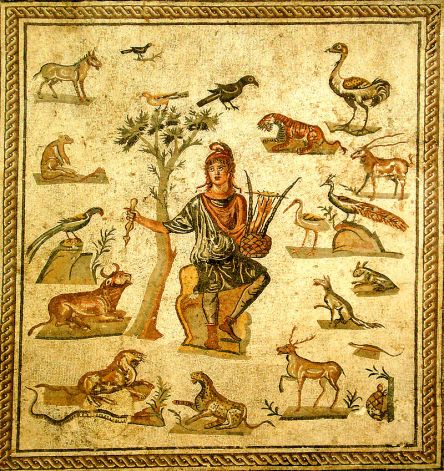 Over the weekend you might have heard ABC Classic FM playing the Classic 100 – Music of Passion and Heartbreak featuring 100 favourite pieces of classical music on the theme of love. Interestingly, three of the pieces that made the top ten were based on love stories from the classical past: Henry Purcell’s ‘When I Am Laid in Earth’ from Dido and Aeneas; Aram Khachaturian’s Adagio of Spartacus; and Christoph Willibold Gluck’s ‘What shall I do without Eurydice’ from Orpheus and Eurydice. There is little doubt that ancient Greece and Rome have inspired composers to write some of the most adored love songs of all time.

For me, number nine (Gluck’s Orpheus and Eurydice) should have been number one (in place of Georges Bizet’s The Pearl Fishers). How could two blokes singing whilst fishing trump one of the greatest love stories of all time?! I can’t think of a more romantic and tragic story than that of Orpheus and Eurydice.

According to Greek myth, Orpheus was a musician and poet of Thrace, the son of Apollo and Kalliope. He had a marvellous ability to soothe wild animals and nature with his divine music (which makes sense to me since classical music worked wonders on our children over the weekend!).

Orpheus fell madly in love with Eurydice but their marriage was doomed. Just after the marriage rites were completed, Eurydice died after being bitten on the heel by a serpent. The distraught Orpheus descends into Hades (the Underworld) to beg Hades and Persephone to reverse Eurydice’s death and release her spirit so they can enjoy their love. Orpheus’ music enchants the spirits of the Underworld, and for a moment, there is lovely music among the dead:

“So to the music of his strings he sang,

And all the bloodless spirits wept to hear;

And Tantalus forgot the fleeing water,

Ixion’s wheel was tranced; the Danaids

Laid down their urns; the vultures left their feast;

And Sisyphus sat rapt upon his stone.”

Persephone summons Eurydice’s spirit and makes Orpheus promise that he will not look at her until they have returned to the world above. So Orpheus and Eurydice climb the path back to sunlight together:

Through the hushed silence and the murky gloom;

And now they neared the edge of the bright world,

And, fearing lest she faint, longing to look,

He turned his eyes – and straight she slipped away.

He stretched his arms to hold her – to be held –

And clasped, poor soul, naught but the yielding air.”

Eurydice suffers a double death. And poor Orpheus! Who could withstand losing one’s beloved twice over? Orpheus’ grief is unbearable. He begs to be allowed to cross the River Styx a second time but the ferryman refuses. Orpheus sits upon the river bank for seven days “unkempt and fasting, anguish, grief and tears his nourishment”. And he never loves again until his tragic death at the hands of a frenzied band of Thracian women.

Dear Orpheus, you remind us of the wonderful power of music to soothe our souls, and that no matter what our losses in love might be, your loss was doubly so.